Boat day- excursions are always popular additional possibility while at the destination.

We, locals rarely do them since either we have our own boat to enjoy the sea scapes or we are too bussy during the season to do it. However, after a long planning and reorganising because of forementioned issues, my friend Zdenka and me decided to take one finally and went for the tourist most popular; "Around the Island Rab" day trip this last September Sunday. The trip includes visits to Zavratnica bay on the main land, Goli otok, Grgur island and finally Cristal bay in Kalifront area on Rab. We were both intriqued mostly because we went on this trip years ago; as girls in 3rd grade of elementary school. Neither remembered much of it, except the curiouse details that we pionir girls played hula-hula on board and that we visited that horrid prison island, but the whole trip was a big blur to both. This attempt to revive the child memories prevailed in deciding which excursion to take, specially because we wanted to reprogramm our past school data on Goli after all the changes in the society in the last 18 years.

We were so excited about the trip that started around 09:30 from the port of Rab. Perfect lighting and great motive for a keen photographer but we forgot to take the pictures of Rab veduta bathing in the mild the morning sun enjoying the smooth navigation and socialising with our hosts and other guests on board.

The boat was slowly sailing through Barbat canal allowing us enough time to wonder the sights; both villages ( Banjol and Barbat) changed so much. Although both of us were native, new houses, reconstructed houses, changed facades, rebuilt houses, new lean-to quarters, changed yards and alike occurrences made it quite tricky to pinpoint the orientation spots and then work out whose house was where. I suppose all the foreich tourist on board had quite different thoughts in their heads.

When we hit Pudarica I started to get excited about all the fascinating landscapes approaching. Sandy bays and reddish hills covered with 'makia' - arromatic herbage and vineyards. Sage scent comes to my nostriles and I smile.

The route goes on towards ferryport Misnjak - Rab's main connection with the outer world. Hills are rocky, barren, light and sharp. 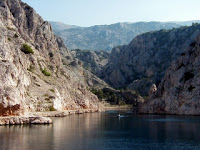 After crossing the channel, entering Zavratnica bay bellow Velebit mountain slightly misty after the morning dew takes the breath away. This is the most beautiful cove of the Croatian Adriatic, wild and stunning 900 m long cove within a 100-meters high canyon. Because of its beauty Zavratnica has been designated a "protected landscape" and is integral part of Velebit Nature Park educational trail. During the WW2 this was a hiding spot for german war ships under attack from british air-forces. RAF managed to sunk one of the ships and it can be seen today at the depth of only 8-10 m.
Zavratnica can be visited by boat or on foot by the educational trekking path what gives you the opportunity to study variouse rare herbs. Instead, some people went for swimming from the board.

In a while we continued along the baren side of the Rab island through the Velebit channel towards the main goal of our trip: to Goli Otok. 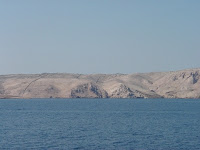 Stone desert with some strange walls cutting the hills contrasted by blue sky and even more blue sea. Great photo session. The eastern side of Rab is so unusually bare that it looks like no single grass exists on that pile of stones. In fact, the hills are covered with small vigorous herbs and lichen and populated with herds of sheeps that you do not see because they blend with the landscape. This side of the island is so barren because of the orcanic bura winds that salts the earth and wrings any plant.

Most of the visitors on board know little to nothing about this place. It is a casual stop on this trip for most and main point for the two of us. I heard it is devastated, but I never been here before so I cannot compare. My knowledge about it is also scarse; Goli was Titos prisoner-island in the adriatic sea, firstly for political disidents turned to high-security labor camp. Island was torture prison for male prisoners from 1949 to 1956. throughout the Informbiro period; known Stalinists and others with sympathy towards the Soviet Union. Later on they were mixed with regular convicts to be closed in 1989.
Correctional facility; work- camp, prison, concentration camp name it as you like; highly structured mechanism of bizzare torture, humiliation, suffering and death. Yet another place where human is a wolf to another human, where you shimmer in unease and sense the horrid cruelty.

The island was unihabeted - baren - what its name means, so the inmates had to built all the infrastructure: from roads, water basins, ward buildings, cinema, visitors reception, workshops and the toruture pits.
Today this is sad site of even sadder past; ruined factories, demolished buildings and landscape as undignified and shamefull memorial to human suffering. Place is very disturbing, not even a casual restaurant and some 'see you on goli' postcards for tourist can diminish that feeling. Maybe that just adds to the grotesque. Zdenka and I try to mentain usual chat most of the time, I shoot picture after picture and fear I'd run out of memory too soon.

Nevertheless, sighseeing these remains one has to wonder on the cleverness of the structuring and quality of work that is still there although for such a nasty goal. Goli is Masterpieces of pain and labour but I find stone walls in beautiful form, road without cracks; perfect after so many years, unexpectedly some exotic plants and wonder at some fine details like waterbasin. I feel quilty for thinking in category of beautiful for anything inhere. Such words seem so inappropriate around here, because places of suffering always emphesise the pain. Beauty, love, glory seems as not fitting.
Another thing that struck me is that this was obviousely self-suficiant environment. So contemporary subject, specially when applied to what this island originally was; empty harsh place for birds and lizards. Then organised self- suficient community. Of course, we are not forgetting that the people there where there not there by choice but forse. However, who knows, maybe in future humans will have to face places like that by choice and be happy to have found them. Science fiction.

It is such a pitty that when it was closed it did not get turned into open museum: combination of a memorial and preserved environment, with added use.
There shuld be stories told about it and respect paid to human suffering in a digniffied matter. There is no excuse that the place went to this kind of ruins and that the community and state washes its hands of it because of the conflict that rise when anyone talks about it. Not knowing what to do with it is no excuse for such a horrific state in which it is now.

Artistic exorcism few years ago seems to have just added to the horror show.

Despite some stunning views and all this rumbling thoughts, in my heart I cannot wait that we leave here. 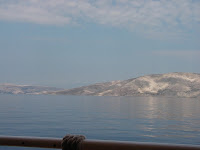 We head off towards another island, sailing just beneath the cliffs Grgur - female prison camp. Same era- same situation with the only difference that the island is much greener.

I supress impressions from Goli and bath in sunlight play on the hills of Krk.

While the majority went for a swimm because the bay is so nice and inviting, with cristal blue sea and pebbles ashore, the two of us went for a quick walkabout. We discovered few remains of the prison buildings, remains of terraces gardens and wells.

After Grgur awaits us sail back along the northern side of island Rab, passing Lopar bay and Sorinj horn, Supetarska and Kamporska draga, around Kalifront horn to the western side along the Kalifron woods to Rab. We made another stop in one of the cristal Kalifront bays for a swimm. Then a treat for the finals; panorama along the Eufemia bay to admire the town Rab silouette. 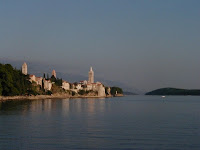 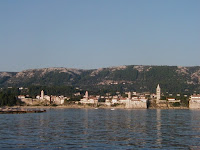 PS. despite my bitter taste in the mouth after this trip, I recommend it. wheter it is suitable for children - I leave to you.